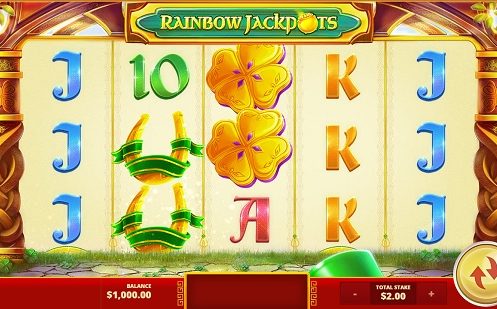 When picking your favorite slot, it usually comes down to the theme of the virtual machine. Most gamblers tend to lean towards familiar or interesting themes and play certain slots more often.

Some companies choose to make 100% original titles and some others go the safe road by creating slots under tried and tested genres. This is the case of Rainbow Jackpots. It is inspired by the popular “Irish Luck” theme.

The graphics in Rainbow Jackpots are full of references to the Irish Luck folklore. The color scheme is very welcoming; it features Irish-inspired elements in red, cream, green, and gold. One of the most distinctive elements of Rainbow Jackpots is the wooden frame in which the reels are encased. It is a nice touch that adds a lot to the game layout.

Another signature element from Rainbow Jackpots is its main Character, The Lucky Leprechaun. This cheerful little person will bring you lots of joy as it’s directly involved in the game’s most exciting features!

The developers of Rainbow Jackpot are rather small and unknown. The name is Red Tiger Gaming and they’ve been around since 2014.

Despite their short history as game makers, their work grants them a place as noticeable video-slot game software providers.

They design games for various platforms and also deliver other related casino and gaming solutions such as data analysis and casino game security.

The people behind Red Tiger are all talented professionals with a great record in designing and developing casino games and related products. Their operations are primarily focused on Europe and Asia.

They are very serious in their mission to improve the gaming experience as they release new titles. Popular slots machines brought to us by Red Tiger are Lucky Wizard, Dragon’s Luck, and Five Star among others.

Playing this slot is nothing complicated. You’ll face a layout of five reels and three rows. The payouts you get can come from any of the 20 fixed paylines.

Every valid payline will count and add up to a total payout prize on each winning spin. The betting range in Rainbow Jackpots goes from .20 to 500 coins. You could say is a bit conservative but it proves to keep your funds from running out.

As you start playing Rainbow Jackpots, you will first watch the Lucky Leprechaun’s green hat as he passes by. You better pay attention to this jolly little man as he could appear at any time to bring you amazing gifts in the form of special features!

The soundtrack in Rainbow Jackpots is a very nice Irish-themed tune that will surely keep you smiling as you play.

There are many Special Features in Rainbow Jackpots. They enrich the gambling experience very much. As expected, they are strongly influenced by the Irish Theme.

The Beer Bonus includes a brief minigame. After getting 3x beers from a spin you’ll have to pick one as they are highlighted.

This will grant you a random prize that was assigned to the glass you chose. The Golden Pots are a bit more powerful. The will trigger respins up to 100 times, that of course, proven you have the luck to string together that many rounds!

When the Lucky Leprechaun pops on your screen, he will trigger a random feature: symbol swap/mega-swap, beer bonus/triple beer bonus or mega respin. This little guy comes at random, but every time you see it, be sure that you’ll get amazing prizes!

The highest bet in Rainbow jackpots is 500 coins. You’ll get up to 800 coins in return if you’re lucky enough to collect 5 wilds on a single spin.

Rainbow Jackpots is what you could call a “Feel Good Game”. The visuals, the music, and the gameplay are amazing at putting you in a great mood. The Irish theme was executed perfectly on this one.

The extra features are also excellent. Any of them will bring tons of excitement to your gambling session: The Respin Feature, The Beer Bonus, or the Symbol/Mega Symbol swaps are great additions to Rainbow Jackpots! 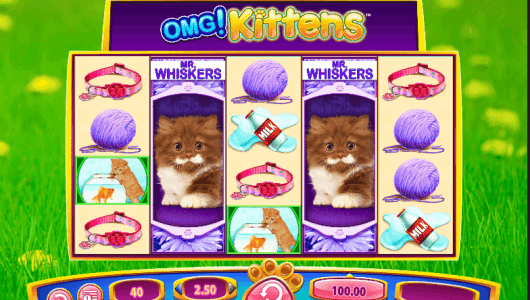 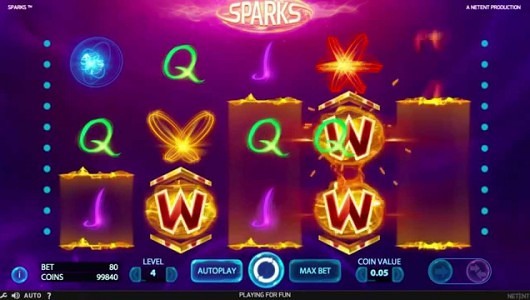 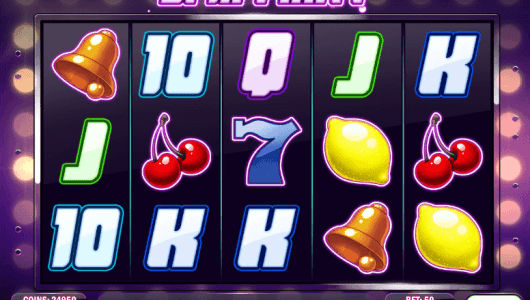